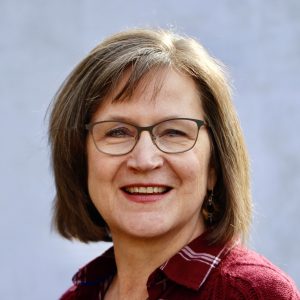 She was born in St. Louis and grew up in Kirksville and Cape Girardeau, Missouri before attending Valparaiso University, graduating in 1981 with a degree in Economics. She and John were married in 1985 and moved to Lincoln, Kansas, where their daughters, Katrina and Louisa, were born. In 1993 they moved to Russia as missionaries in Moscow for LCMS World Mission. Their son, Ted, was born (in Finland) while they lived in Moscow. Following 11 years in Russia they also served for two years in Frankfurt, Germany and seven years in Hong Kong. Since 2014 they have lived in Seward, Nebraska, where Susan also works part-time in the Registrar’s Office at Concordia University.

Susan has enjoyed serving in a variety of roles over the years, as the family has grown and changed locations. This included many opportunities as a pastor’s wife in rural Kansas, and serving on school board or in parent groups as their children were growing up. In Hong Kong she was actively involved in English Conversation groups and worked as the secretary for the church they attended. Throughout her adult life, Susan has sung in church and community choirs wherever she has lived.